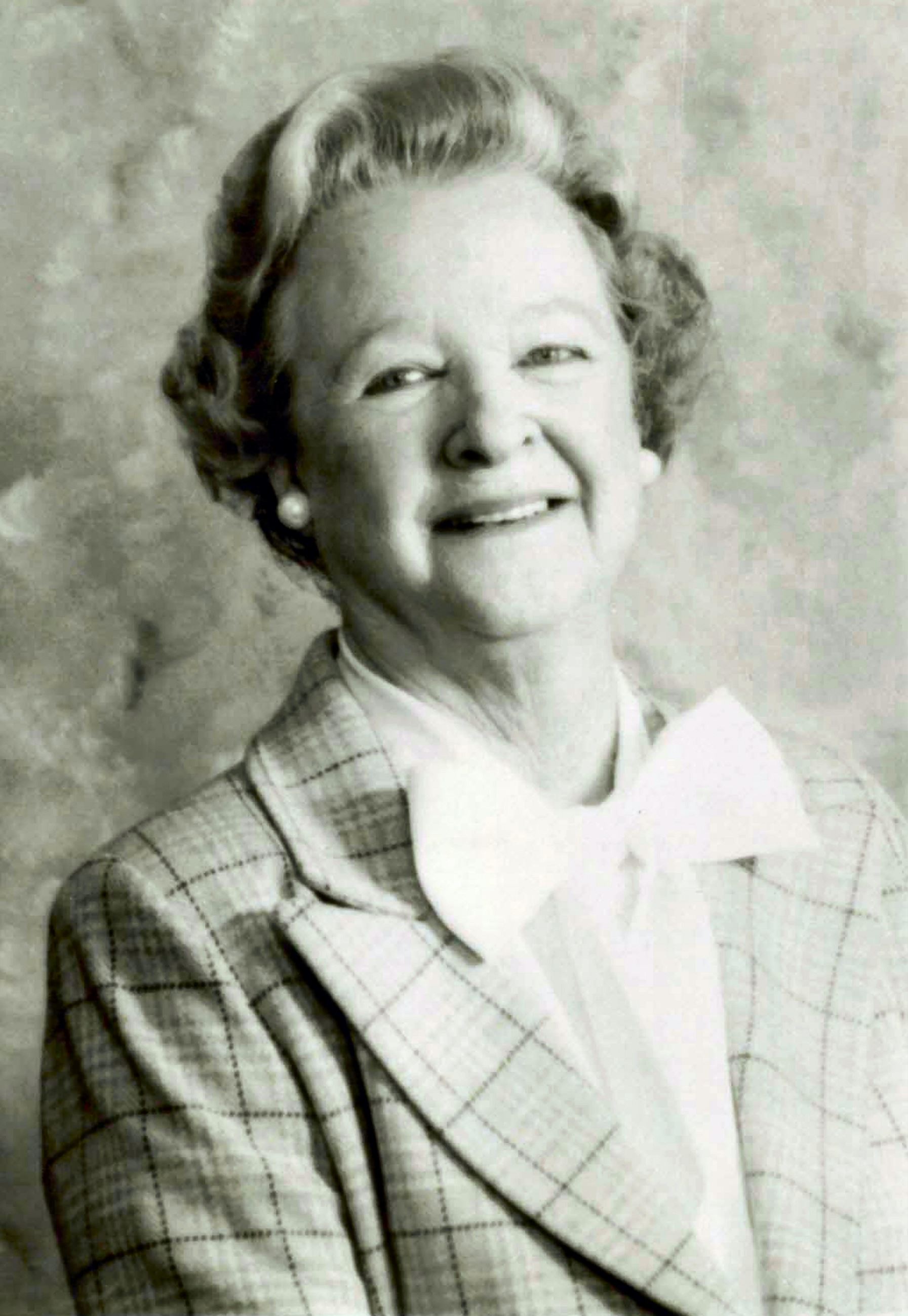 At a time when women in the workplace were a rarity, Mrs. Harrison went to work as a children's librarian at the Savannah Public Library. This began a remarkable journey that touched hundreds of thousands of lives and ended with a legacy of love, hope and fulfillment.

Mildred Holland Bennett was born in Savannah, Georgia, on October 22, 1909, the second of six children. She finished Savannah High School and graduated from Wesleyan College in 1931 with an AB degree. She received her master's degree in Library Science in 1932 from Emory University in Atlanta.

Mrs. Harrison moved to Birmingham during the mid 1930's to take a position at the Birmingham Public Library. This was only the first of many roles she would play during her 60 years of service in Alabama's public libraries. She worked with children at library branches in North Birmingham and Avondale. Her early duties at the Birmingham Public Library included driving a panel truck that served as a bookmobile. The bookmobile made stops in coal mining towns where miners and their families were often on strike and going hungry. Out of these early years came a dedication and devotion to providing access to knowledge for all Alabamians. In her own words, It was like missionary work.

While working at the Birmingham Public Library, Mrs. Harrison met a young bank clerk, Karl, who was going to law school at night. They married on June 5, 1937. The newlyweds settled in Shelby County. Together they raised four children. During their sixty years of marriage, they served as role models and civic leaders in their city, county and state. Mrs. Harrison dedicated her life to bringing books, learning and libraries to all Alabama residents. She was a pioneer with a vision willing to champion the right of all people to free public library service because she knew education was the key to freedom. So began her journey.

When the New Deal came to Alabama and word went out that the Works Progress Administration was looking for trained librarians, Mrs. Harrison signed on. Her first assignment was in Talladega County where she went place to place unsnarling government red tape. She made the long trip from Shelby County to Talladega over unpaved and often unsafe roads for over a year.

In 1939 Mrs. Harrison was hired as the first field consultant for Alabama Public Library Service. She traveled the state setting up rural libraries, helping organize collections, consulting and training staff and promoting libraries, literacy and reading.

The WPA came to Shelby County in 1940. The first Shelby County librarian was hired, Mrs. Harrison. She had a job but no library. A circuit judge took pity on the new librarian and gave her a room in his offices at the courthouse. Mrs. Harrison immediately began loading her 1939 Ford with books and traveling across the county's dirt roads to deliver to homes, stores, schools or any place willing to house a collection that would be available to anyone wanting to read. Rain or shine, Mrs. Harrison traveled county roads rotating the books, helping anyone wanting to read, encouraging communities to come together to help one another, trying to get businesses interested in providing book deposits, campaigning for more money for books and spreading the news that a literate workforce was a more employable workforce.

Mrs. Harrison left the library world temporarily in 1943. She went to Rhode Island with her husband while he served in the Navy. In 1946 the Harrisons came home to Columbiana in Shelby County. Mrs. Harrison was chosen to serve as the first chairman of the county's new library board. She served as library board chair from 1946 until her death in 1997.

Mrs. Harrison had a vision of library service that was based on unity. Unity of all libraries working together to provide information and books to all citizens. Because of her efforts, the Harrison Regional Library System was formed bringing together all Shelby County public Libraries. The Harrison Regional Library System has been serving Shelby County for over 60 years. Today the System is made up of eleven libraries serving 145,000 residents.

Governor Albert Brewer appointed Mrs. Harrison to the state executive board of Alabama Public Library Service in 1970. She served six years including being Chair from 1971 to 1976 and Chair of the Building Committee responsible for the construction of the new APLS building.

Mrs. Harrison knew that education was the key to success, especially the success of public libraries. She worked with Alabama Education Television to develop a series called The Art of Helping. The series provided lessons and training for library pre-professionals.

Mrs. Harrison supported and helped in the establishment of the first graduate School of Library Service in Tuscaloosa. She funded a scholarship that still exists today.

Mrs. Harrison's determination to bring books to all people wasn't tied to buildings. She promoted the concept of bringing books to all areas in the state especially areas without public libraries. Her work to introduce bookmobiles and her work with the Appalachian Regional Commission to fund bookmobiles provided opportunities for library service in areas never before served.

While Mrs. Harrison was tirelessly working at the state level to bring books to people all across the state, she continued her work as Board chair of the Shelby County Public Libraries. She put the first Shelby County Bookmobile into service in 1964. She served on building committees that successfully completed three new Shelby County municipal libraries and one library district.

In 1984, Mrs. Harrison was instrumental in the implementation of the first countywide library card. In 1985, the Shelby County Library was renamed the Mildred B. Harrison Regional Library. The 1986 implementation of a Books-By-Mail program that serves homebound citizens throughout Shelby County was due to the determination and dedication of Mrs. Harrison. Her goals to provide books and knowledge to everyone included senior citizens, physically challenged and those geographically isolated. Today the Books-By-Mail program continues to bring books, magazines, books on tape and videos to Shelby County's homebound.

The Alabama Library Association's Public Servant Award was presented to Mrs. Harrison in 1995. The Association praised her for her devotion to the improvement of libraries saying "her dedicated service and significant contributions to the status of libraries and access to knowledge will be felt throughout Alabama for years to come."

In 1983, Mr. and Mrs. Harrison founded the Smith-Harrison Museum of George Washington Memorabilia. There is no admittance charge at this museum that houses a large collection of George and Martha Washington memorabilia. Like books and knowledge, Mrs. Harrison felt everyone, no matter economic or social status, should have the opportunity to see and experience our country's history.

One of Mrs. Harrison's dreams was the creation of the Shelby County Library Foundation. She saw the Foundation as a way to make giving to libraries easier and a way of providing alternative funding for special projects and collections. The creation of this foundation in 1997 was one of her last acts of public service.

Mrs. Mildred Holland Bennett Harrison died November 28, 1997. Her death occurred fifteen days after the death of her beloved Karl. They shared a remarkable life. Their four children, ten grandchildren and three great-grandchildren are carrying on their tradition of community and civic involvement.

Upon her death, The Shelby County Reporter's headlines read "County mourns 'First Lady of Libraries". Terms like the following have been used to describe Mrs. Harrison:

Those who knew her best know she was dedicated to her family, church, community and state. Her efforts to promote libraries and learning were works from her heart. She had a gift for seeing what needed to be done and doing it. Because of her pioneer efforts, Alabama public libraries are the 'equalizers' between the have and have nots, a place where anyone can travel the world in books or find unlimited resources via computers.

Times have changed since Mrs. Harrison's first trips to those rural mining towns in the 1930s. The need for information and reading is ever increasing. Mrs. Harrison's legacy of learning and providing access to information for every Alabama citizen is more important now than ever before. We thank Mrs. Harrison for her many sacrifices on our behalf. Without her efforts, we would all be a little less.